‘Music gives a soul to the universe, wings to the mind, flight to the imagination, and life to everything.’

At Pennoweth, children gain a secure understanding of what music is through listening, singing, playing, evaluating, analysing, and composing across a wide variety of historical periods, styles, traditions, and musical genres. Our aim is for all children to develop an inquisitiveness for Music, as well as an understanding and acceptance of the validity and importance of all types of music. We are committed to ensuring children understand the value and importance of music in the wider community, and are able to use their musical skills, knowledge, and experiences to involve themselves in music, in a variety of different contexts.

Taken from Cornerstones, our curriculum is taught in blocks across a two-year cycle in order that children achieve depth in their learning. Key knowledge, skills and associated vocabulary have been identified and these have been mapped across the school to ensure progression. At the start of each unit, teachers establish the starting point for each child and ensure that all lessons taught are relevant and developmental, and consideration is given to how greater depth will be reached within each lesson, as well as how learners will be supported in line with the school’s commitment to inclusion.

Our curriculum ensures children experience singing, listening to, playing, performing and evaluating various genres of music. Through the effective teaching of music, children are encouraged to use some of the language of music to dissect it, and understand how it is made, played, appreciated and analysed. Children also learn how to compose focusing on different dimensions of music. Composing or performing using body percussion and vocal sounds is part of our curriculum, developing an understanding of the various musical elements without the complexity of an instrument.

Wherever possible, children will support musical events within the community, including the Festival of Light, Murdoch Day celebrations and the St. Piran’s Day Parade. As part of these events, children will purposefully showcase their musical talents and skills to a wide audience.

The culture of our DNA at Pennoweth also supports the teaching of music.

The planned progression of music as the children move through the school allows them to grow in confidence with their musical knowledge and ensures our children always feel safe and comfortable. The children are encouraged to see mistakes as a learning opportunity so they feel comfortable when this happens in the classroom. The lessons are planned to ensure that every child is included in every lesson, this combined with the help and support they receive from all adults and children helps them to feel loved. The children are often given a choice on how to present their learning and are given regular opportunities to work independently, helping them to feel be responsible for their own learning. With music based around a project the children are always engaged and motivated with their learning. The use of sticky strips helps them to quickly pick up new knowledge that they can recall at a later date. Finally, our children are ready. Ready to be independent learners who can apply their knowledge in a range of situations and contexts.

Our Music Ambassadors
Our music ambassadors are: Israel, Ollie, Emillie and Lyra. They represent music across the school and have been chosen for their passion for music. In their role, they will share their love for music and help to improve knowledge and skills across the school.

What will my child experience through music at Pennoweth?

During lessons, children will listen to and appreciate music, giving their opinions on a range of genres. Singing and exploring different instruments will also play a big role as children use this to gain an understanding of musical terminology such as rhythm, beat, tempo and pitch. Throughout the school composing will also be an important component, ranging from writing lyrics to a given melody to composing the entire piece. Children will work on this over a number of lessons leading to a performance and evaluation of this.

Our wider curriculum follows a two-year cycle which can be seen below. Alongside this, music is taught throughout the year focusing on listening to and appreciating music, musical traditions, recognising notation, composing and performing.

In nursery, there is a focus on remembering and singing familiar songs. Children are asked to match someone’s pitch and recognise if a sound is high or low. They have access to a box of instruments where they can create their own music and express themselves. Also, there are a number of cross curricula links with children being introduced to songs in maths and those linked to stories.

Music comes under the early learning goal of ‘expressive arts and design’. The children are given opportunities throughout the day to express themselves through music. They have access to a box of instruments which is regularly rotated to allow them to investigate sounds. This also gives children a chance to move and dance to the music that they are creating and be imaginative and expressive. There are also chances for children to make their own instruments such as shakers. In class, children regularly sing a range of well-known nursery rhymes and songs. They are able to listen to the music and talk about how it makes them feel, what they like and what they dislike. Alongside this, there are also a number of cross curricula links with songs being used in maths, for stories and linked to projects. Children are regularly able to perform to their peers as well as in assemblies and Christmas performances.

KS1’s music project this year is called ‘Beat Band Boogie’. This project starts with the children listening to different styles of music including samba, blues and classical and thinking about how it makes them feel. They then look at different types of instruments and see if they can recognise them in a piece of music. Next, they look at different melodies and compare them using musical vocabulary. Throughout the project, the children have the chance to use instruments, their voices and body percussion to create different sounds and think about the effect these have.

Lower KS2’s music project this year is ‘Playlist’. At the start of the project, the children listen to two different pieces of music, discuss the instruments that they can hear and compare and evaluate them. They also learn about formal notation and use this to play a song on the glockenspiels and experiment with different instruments. The children then compose a song on the glockenspiel and record it using this notation. They learn about the importance of warming up when singing and practise doing this. Finally, after warming up the children practise singing different songs with a focus on call and response songs.

Upper KS2’s music project for this year is ‘A Child’s War’. The children start the project by listening to a range of sounds from the war, including air raid sirens, bombing, Spitfires, the Blitz, gas mask drills and ‘all clear’ sirens. They then explain how these sounds make them feel when they hear them. Throughout the project, they have the chance to learn to sing popular wartime children’s songs such as Run Rabbit, Run, It’s a Long Way to Tipperary and Pack Up Your Troubles in Your Old Kit Bag. Using one of these songs the children then change the lyrics to fit in with their class novel ‘Good Night Mister Tom.’

KS1’s music project this year is called ‘Rio de Vida’ which centres around Brazil and carnivals. The project starts with the children listening to music from Brazil with a particular focus on percussion instruments. They will then write a class song to a well-known tune that describes a Brazilian mythical creature. Over a number of lessons, they will practise this to create a polished performance at the end of the project using percussion instruments to accompany their singing.

Lower KS2’s music project this year is ‘Heroes and Villains’ which focuses on music that depicts these, particularly in films. The children start by listening to the song ‘Cruella De Vil’ which they practise regularly allowing for a performance at the end of the project. They then listen to different versions of this song and other villainous music in films focusing on describing the tempo, rhythms and how it makes them feel. In small groups, the children will compose lyrics to a well known nursery rhythm and then teach this to the rest of the class.

Upper KS2’s music project for this year is ‘Alchemy Island’ which is a magical mysterious place that hides valuable treasures. The project focuses on composing with the children starting by using musical software to create magical sounds. They then create their own graphic scores using shapes and symbols to represent the instruments they have used. Finally, the children work together to compose a simple tune that they write lyrics for, leading to them recording and performing this.

Harper, year 1, ‘We made low sounds and high sounds when we were singing hot cross buns. We did different pitches. We played drums and it sounded like samba music.’

Isaiah, year 2, ‘I loved it when we did the rounds. It was difficult, we had to focus on our own voice so didn’t get distracted.’

Austeja, year 4, ‘When we are having a lesson about music the thing I liked is playing the instruments because it is fun. I like the sound of every instrument.’

Amelia, year 4, ‘I want to be a singer when I’m older and I like learning all the musical vocabulary.’

Freddie, year 3, ‘I like listening to different types of music because I like the timbre that each instrument makes.’

Zach, year 3, ‘I like listening to music and playing music because of the sounds the different instruments make.’

Isabelle, year 5, ‘I like that music can calm you down sometimes or cheer you up. I liked listening to old fashion songs and seeing if it had the same effect it did back then.’

Exodus, year 5, ‘I like the amount of variety that music can have. All the different sounds and noises to make the end product. There’s always a type of music you enjoy.’

Leo, year 5, ‘I enjoyed the whole topic. I enjoyed listening to the music.’

Fletcher, year 5, ‘They sung ‘Run Rabbit’ in the war because they used to use a rabbit to check places were safe.’ 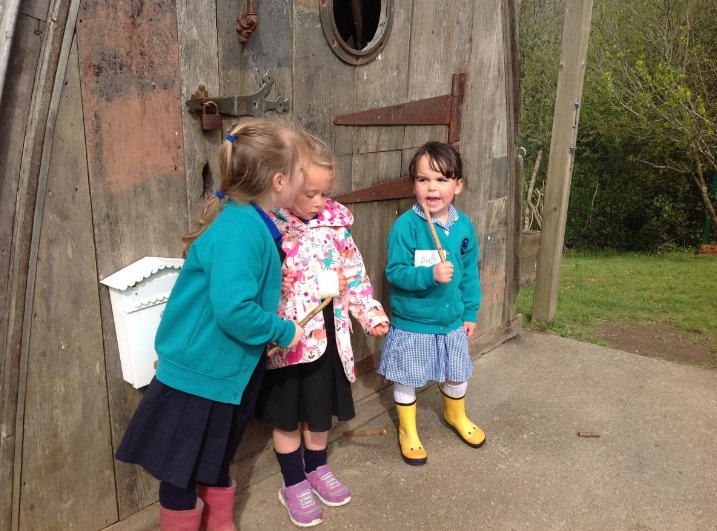 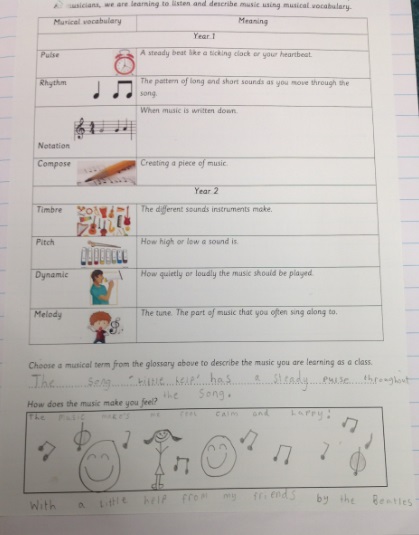 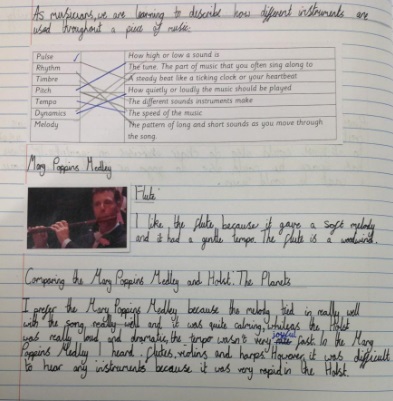 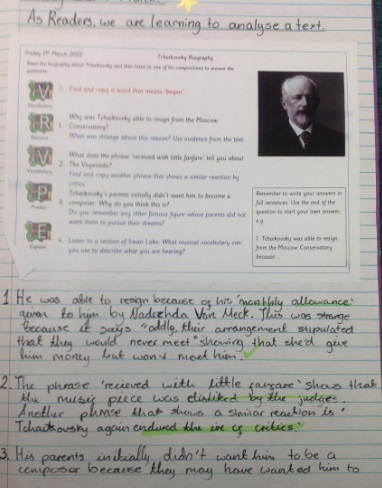 The different lesson options can be seen below:

If you are interested in signing up your child, please use the following website: https://cmst.co.uk/. If there are no spaces available then you will be placed on a waiting list.